S. Weir Mitchell's personal papers are in Series 1; of special interest are items pertaining to Mitchell's estate, including papers left on his desk at his death, a will written by Mitchell just weeks before he died, and appraisals of his wines, books, and china. Also present is a list of items sold at a sheriff's sale in the 1930s and an inventory of Mitchell's rare book and autograph collection, which was sold to an auction house in 1941. Subseries 1.2, which contains royalties statements from several different publishing houses, provides a record of Mitchell's wages as an author. These monthly statements, spanning 1882 to 1918, document Mitchell's earnings from each of his works, whether a medical book, novel, or volume of poetry.

Other personal papers in Series 1 include Mitchell's academic transcript from the University of Pennsylvania (complete with a record of misconduct charges) and lecture notes (1849-1850) from Charles D. Meigs's class on obstetrics at Jefferson Medical College. Also present are items that Mitchell might have saved for sentimental reasons, such as obituaries of his father and older brother; souvenirs from his trip to Japan in 1901; a photograph of himself with a child, perhaps one of his grandchildren; and records of the military service of his younger brothers. Also of interest are literary manuscripts presented to Mitchell by his friends, including a typescript play (1894) by Thomas Wharton and Owen Wister based on Mitchell's Francois Villon, and a signed, typescript poem (1892) by Oliver Wendell Holmes. 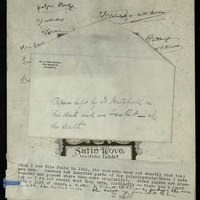